Start Tracking Your Success With GPS

Whether we realize it or not, we rely on GPS data and technology every day. From something as simple as tracking when a package will arrive to offering us directions to meet friends at a favorite restaurant, GPS is everywhere. But GPS has so much more to offer than just consumer luxuries.

In an era where margins are growing thinner, and the need for accurate data growing larger, the leaders of every industry are leveraging GPS systems and devices to help them make smarter business decisions. Could your business benefit from the use of a GPS device and management system? The answer, of course, is “yes,” but there’s a little more to it than that. Take a look at how Skypatrol is helping businesses in a variety of different industries.

What Does GPS Have to Offer Your Industry? 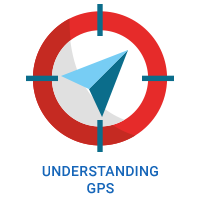 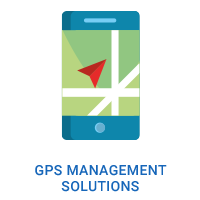 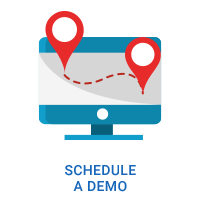 While GPS might have gained most of its traction in the last two decades, the fact is, this useful technology has been around since the 1960s. Originally designed for military use, the government launched a number of satellites into space that shared data with devices on the ground. From the late 1970s to the early 1990s, only the military had any regular access to GPS data and coordinates. Even with numerous satellites being launched and a number of GPS systems being developed, the purposes and uses for GPS were fairly limited to just geo-coordinates and navigation.

By 1996, the Clinton administration saw the value in making this technology and data commercially available. The administration issued a policy directive that created a dual-use GPS satellite system. This allowed both the military and the civilian population to have access to these highly accurate sets of data and information. As more companies and research groups began to use GPS, many realized how valuable this technology could be for tracking assets and vehicles.

But the first commercial, and military for that matter, GPS units were unwieldy, to say the least. If a business wanted to track their fleet, each truck would have to be outfitted with an enormous tracking device. On top of that, they would have to pay exorbitant amounts of money to access a GPS satellite system. For a while, only the most ambitious, or wealthy, businesses could afford to utilize a GPS system. But thanks to two decades of advances in tracking technology, wireless communication, and internet systems, it’s now easier, and more affordable than ever to install a GPS unit on every vehicle in your fleet. 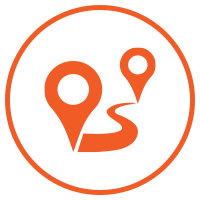 Your GPS doesn’t do all the work itself. Indeed, it’s just one small part in a much larger network that provides you with your location data. To get the accurate, real-time location data that your business relies on, your GPS device leverages a network of about 30 satellites that are in constant orbit around the earth. These satellites hang in space about 12,000 miles above the earth and can be accessed by anyone with a GPS enabled device.

Anywhere you stand on the planet, your GPS device will use radio signals to communicate with at least four individual satellites. Each of these satellites sends a different set of location information about its position and the current time. Your GPS determines how far away the satellite is based on how long it took to receive that information. After receiving information from three satellites, your device uses trilateration to present you with an accurate location.

Trilateration is a complicated term for a fairly straightforward process. Essentially, when your GPs connects with three different satellites, your GPS thinks about how far away you are from each of them. It knows that you’re within a given range of the satellite, which can be thought of as a circle. The GPS looks for the points where those three circles intersect and presents that data to you.

When it comes time to adopt a GPS tracking system and supporting network of devices, you’ll be presented with a variety of choices. At Skypatrol, we offer a complete complement of devices to best meet your needs. Some devices rely on a connection to the vehicle itself, while others use a battery backup.

Ultimately, what you’re trying to track, how you want to track it, and what you want to use that data for will influence your choice of GPS unit. 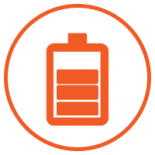 As the name implies, these GPS units do not rely on the vehicle’s power supply in order to function. These units rely on a large battery, and to save power, do not broadcast their location as frequently as other units. A battery-powered GPS might report its position every 15 minutes while in motion, and every four while still. 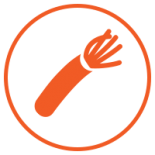 These GPS units are wired directly into the vehicle itself, relying on its power supply. This makes them well-suited for vehicles with diesel engines or OBD II ports. These units can be easily hidden within the vehicle, which makes them great for fleet managers who are tracking work trucks. 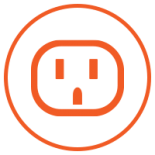 These GPS units fit into the OBD II ports in a vehicle and can track a vehicle when it is running, or when it is off. Those working in car sales or asset recovery can benefit from the use of a plug-in device. Plug-in and hardwired units will broadcast their location about every minute the vehicle is moving and every hour when the vehicle is still.

Realistically, nearly everyone in every industry is utilizing a GPS system of some kind and in some capacity. Thanks to the proliferation of GPS-enabled smartphones, it’s easier than ever to get access to reliable GPS data. But not every industry can simply rely on a simple smartphone interface. They might require a much more detailed, and more tailored GPS management system.

Transit is perhaps one of the most obvious users of GPS devices and was an early adopter. Airplanes, buses, trains, and even ride-sharing services all use GPS systems to ensure that their passengers and cargo are arriving on time and to the right destination.

Trucking also makes use of GPS systems to ensure that their drivers are following the most direct and fastest routes. Fleet managers can also utilize that data to project and manage fuel costs, schedule maintenance trips, and ensure deliveries are made on time and under budget.

Most law enforcement and emergency response agencies now make use of GPS systems. By having a clear understanding of where their first responders are, dispatchers can send the nearest unit to respond to a call, saving time, energy, and even lives.

Each of these industries is using their GPS systems for different purposes, but are all interested in similar data sets and goals. A GPS device allows you to track your fleet, deliveries, or assets in near-real-time. This allows managers and dispatchers to make on-the-fly decisions about route changes, additional stops, or whether that vehicle needs to move at all. They’re also monitoring factors like speed and performance. Metrics like these lets them measure response time and driver safety, which can be used in reviews, hiring decisions, and more. By controlling which vehicles are being used, and when and why, managers and dispatchers can more accurately determine the readiness of their fleet, it’s condition and any associated repair costs. 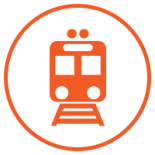 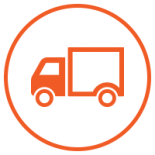 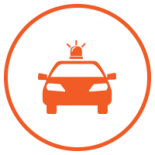 Ultimately, no matter which industry you’re in, using a GPS system helps you save time, and more importantly, money. You’ll save on fuel costs, limit your insurance and liability costs, improve your customer satisfaction, and lower your repair costs.

It’s never been more important to track your assets, and a comprehensive GPS solution can help you do just that. Skypatrol has been designing forward-thinking GPS systems for nearly 20 years, and you’ll find our software and hardware in businesses across the globe.

You can make improvements in the behavior of your drivers, reduce your transit times, lower your insurance premiums, and elevate the performance of your fleet all with one user-friendly interface. Fleet Command from Skypatrol utilizes the data collected by the GPS units already installed in your vehicles.

You can locate all of the vehicles in your fleet at the press of a button, analyze real-time KPIs, look at detailed maps, and even vehicle service history reports. Fleet Command is designed to facilitate rapid decision making based on the most important data sets.

Shipping companies, freight haulers, and even independent drivers utilize our Fleet Command software for a myriad of reasons. From planning more effective routes to mitigating fuel and maintenance costs, this GPS software can help you make lasting decisions for your business.

If you’re working in the subprime industry, you already know that the right tools and good portfolio management are the keys to success. That’s why we’ve tailor-made a GPS system just for you. Defender GPS can locate an asset on demand, leave a breadcrumb trail, and even lets you set up geofenced areas.

We’ve seen the Defender system adopted in industries like Buy-Here-Pay-Here, Bank and auto financing, and even credit unions. These industries may need to repossess certain assets due to non-payment. When you’ve invested in a vehicle, it’s only natural to want to get the full value out of it. If a customer can’t pay, you’re losing money, and you’ll need to recover the vehicle to cover your losses.

That’s why Defender has features like ignition on and off, which knows when the vehicle is moving, a repo mode which gives you up-to-the-minute location information for a vehicle for up to 72-hours, and it even sends automated payment reminders.

Whether there are a dozen cars on your lot or 1,200, keeping track of them means you can better serve your customers and better care for your inventory. ProtekGPS+ is the dealer stock management and inventory program from Skypatrol.

Once you’ve enabled the ProtekGPS+ to connect with the GPS systems in your inventory, you’ll be able to quickly locate a vehicle based on its stock number, VIN, or even the make and model using just your smartphone. You can quickly recover stolen or missing vehicles, set speed alerts for when a vehicle exceeds the limit, and even send reminders for service calls and when to replace the battery.

ProtekGPS+ uses global positioning data to not only help you but help your customers too. They’ll enjoy the added security of being able to track their vehicle, and you can update them on their maintenance plans, all from the same platform.

By now, it’s easy to see how a GPS system can benefit your business. So whether you’re a one-man operation driving a truck across the country, or you manage a massive vehicle inventory, by leveraging a GPS device and supporting system, you can optimize your workflow, make sound financial decisions, and help your business grow.

Not sure which GPS unit or system might work best for you? Our representatives are happy to take the time to understand your industry, your goals, and your needs. Together, we’ll help you find the ideal tracking solution.

Connect with Skypatrol today and speak with a representative. We’re excited to schedule a demo to show you the power and potential of our GPS tracking solutions!

SKYPATROL IS YOUR SOURCE FOR QUALITY GPS DEVICES

From trackers to navigators, Skypatrol has a premium GPS device to meet the needs of your business. Whether you’re managing a fleet of three trucks or 100, you’ll be able to optimize your resource allocation and delivery times with the data you collect with our GPS hardware and software. Maintain records about your vehicle lot and connect with customers in new ways with the right devices from Skypatrol.

Browse our catalog of GPS hardware now, and find the right software solution for your needs. Reach out to our location tracking technology specialists today to find out more about our work