One of the biggest challenges in the fleet industry today is improving driver safety and behavior on the road—it only takes a split second for an accident to happen that can endanger the fleet driver, other drivers, and even the perception of the fleet business as a whole. Even if there is no accident, erratic driving habits can put many people at risk, and lead to a poor public perception of your fleet business over time. Finding ways to promote good driving behaviors can help to solve some of these issues and keep your business on track—but how do fleet managers monitor driver behaviors when drivers are on the road and they’re stuck in the office?

While GPS tracking solutions and fleet management software have been popular choices for monitoring driving behavior, it doesn’t come close to rivaling the power (and truth) of in-vehicle camera systems. These cameras keep an eye on drivers throughout their workday, ensuring they make good decisions behind the wheel and improving their driving habits over time. However, you won’t be surprise to hear that not all drivers and managers are thrilled by the idea of in-vehicle camera systems.

In this blog, Skypatrol will take a look at the pros and cons of in-vehicle cameras and how they might help or harm fleet businesses as they drive on the road to success. There are plenty of pros and cons, so if you’re a fleet owner or manager, keep these in mind before you make a final decision on in-vehicle cameras for your fleet! 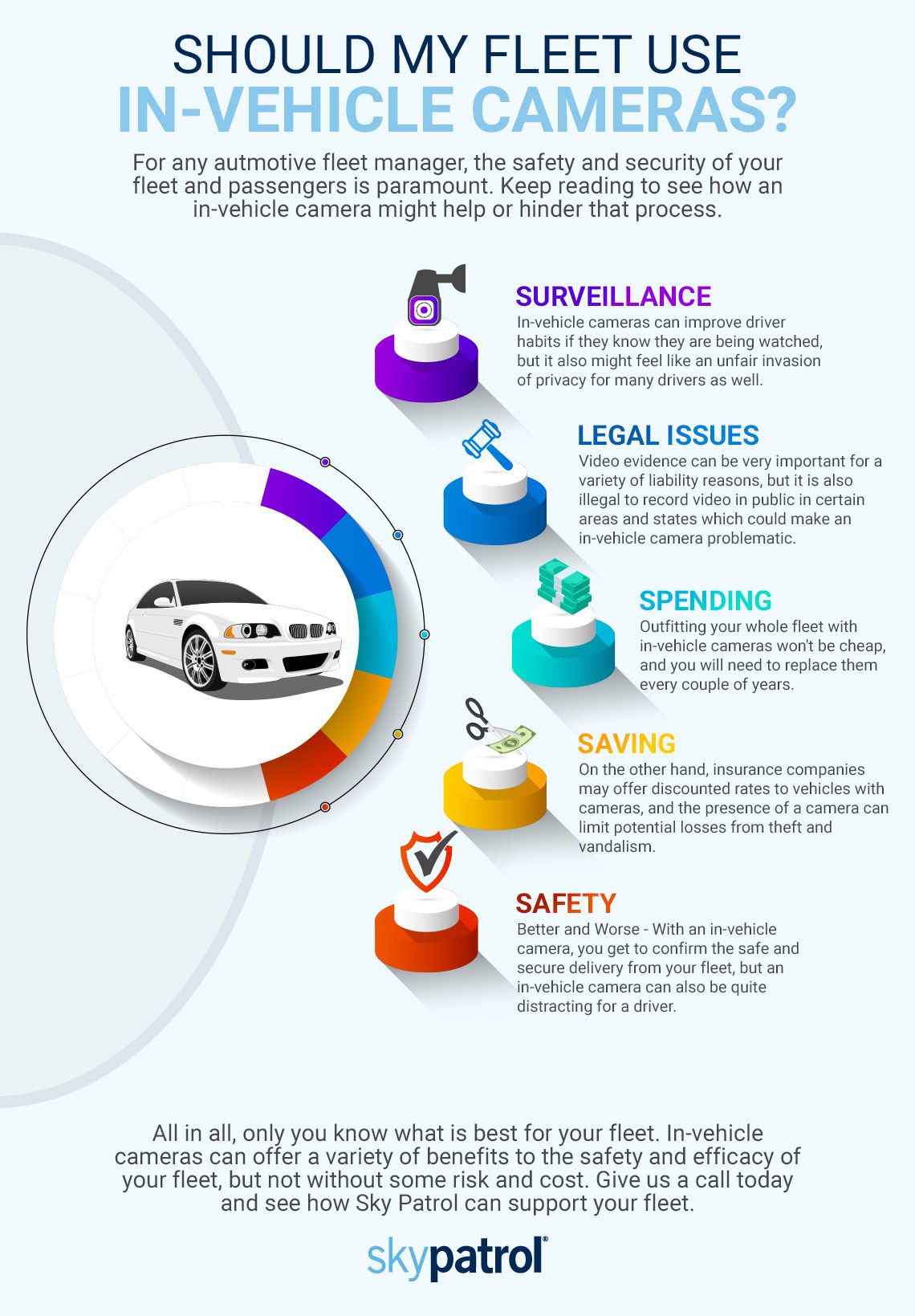 There are plenty of benefits when it comes to in-vehicle cameras for fleet business—and they are all are based around driver safety and honesty. Let’s take a look:

Wouldn’t you be a safer and better driver if you knew you were being watched? Camera footage doesn’t lie—it exposes the true behaviors of drivers, including the truths that drivers don’t even realize themselves. This footage can often be used as a learning tool for fleet managers to show drivers their mistakes and help them make better decisions in the future. It can even be used to teach new drivers to avoid common mistakes and make better decisions from the start, ensuring that even rookie drivers are safe and responsible on the job.

Some insurances will offer lower insurance rates for fleets with in-vehicle cameras, and for good reason—these cameras can provide explicit footage of accidents and collisions, making insurance claims simpler than ever before. The idea of a driver being monitored for good driving behaviors is another incentive for insurance companies lower rates, as there’s less of a risk for drivers to make mistakes or act erratically on the road.

Anyone in the fleet business knows there will plenty of conflict over the timeliness of fleet deliveries or the confirmed location of your drivers. This often leads to “he said she said” situations, where it’s the word of your driver against the word of your client—and of course the client wins out in these situations… unless there’s explicit evidence that proves otherwise.

In-vehicle cameras combined with GPS tracking solutions take the conflicting stories set them aside in favor of cold, hard video evidence. Whether it’s a driver who was an hour late to a delivery or a dishonest client looking for a discount on your services, you’ll be able to take swift action that’s based on the truth and avoid damaging relationships with good drivers or good clients.

While there are plenty of benefits to using in-vehicle cameras for your fleet, there are also a few downsides that could be problematic for your employees and your bottom line. Let’s take a look at the cons of these cameras:

Are these devices actually a breach of privacy? The jury is still out on that one, perhaps with more drivers, managers, and members of the public in support of these cameras. However, the legality of these cameras wouldn’t change the fact that some drivers would upset or uncomfortable if their every move was being watched on a daily basis, and that could ultimately affect the perception of your company among drivers and sink company morale. Putting an in-vehicle camera into a vehicle can make a driver feel like he can’t be trusted—and that could be enough to create some disgruntled employees that could harm your business perception and your profits in the long run.

In some areas, it’s actually illegal to record in public, whether it’s due to local ordinances or state laws. If your drivers enter any areas like this, these cameras could be problematic, so make sure you’re aware of state and local laws to avoid any trouble for you and your drivers.

In-vehicle cameras aren’t cheap to purchase or install, and they very well could be expensive to maintain if they are constantly shorting or breaking down when you need them the most. This could create added hassle and added expenses that could hurt your business profits over time. Is it really worth it to spend thousands of dollars worth of camera systems that need to be replaced every few years? That’s up to your fleet business to decide.

There are plenty of items and devices that can distract drivers and cause safety risks while on the road—radio dials and smartphones, to name the usual suspects. Adding another screen to a vehicle in the form of a in-vehicle camera system could just be another distraction that could keep the eyes of your drivers off the road and increase the risk of accidents. Not exactly what you want if the reason for having these systems is to improve driver safety.

Should I get in-vehicle cameras for my fleet?

Ultimately, the choice is yours as a fleet owner or manager to make the call on in-vehicle cameras for your fleet. Talk to your managerial team and your drivers to see how they might receive these new systems, and evaluate the short-term and long-term costs of these systems for your fleet to make the best possible decision. However, keep this in mind: with camera systems becoming more cost-effective and publicly supported than ever before, it won’t be long before in-vehicle cameras are a mainstream car fixture instead of a hot topic in the world of driver privacy and safety.